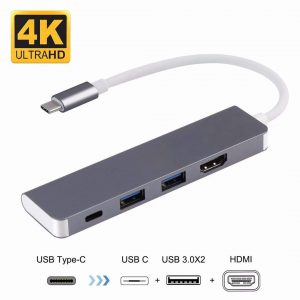 There are many similar items on Amazon that claim they have the same functions as Samsung DeX Pad or Nintendo Switch Dock. Prices are much cheaper than OEMs, and they are smaller and more compact. They just look like a USB hub. So, it obviously lacks a built-in cooling fan. But other than that, it really does the same functions as Samsung DeX Station, Pad or Nintendo Switch Dock. Here are the specs and review of Topoint USB C to HDMI Adapter which I bought. And, if you want to know about the other similar items and characteristics of them, please continue to read this post.

In the box, there is the main item only. There are no accessories.

Other types of USB-C to HDMI Adapters

There are similar items you can find on Amazon.com. You may want to consider them depending on the features you need.

You may want to choose Topoint Adapter over the original DeX Station or Pad, or Nintendo Switch Dock for excellent portability. If you are a frequent traveler and minimalist, you would appreciate for its compact size. It doesn’t take up space in a suitcase, and it weighs almost nothing. You can use a TV in a hotel room as monitor and watch movies from streaming channel you subscribe such as Hulu or Netflix by connecting your Samsung Galaxy smartphone or MacBook Pro. And above all, it’s very inexpensive. Click here to see the latest price.