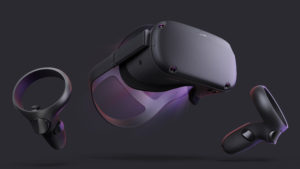 Oculus Quest is a highly-anticipated standalone VR headset which will be available in Spring 2019. It’s an all-in-one VR headset, no wires and no PC like Oculus Go, but six degrees of freedom (6DOF) experience like Oculus Rift. Oculus Quest is expected to take VR gaming to the next level and bring Virtual Reality industry into the mainstream.

Everything you need to start VR with Oculus Quest is inside the box. Setup is as easy as Oculus Go, and performance is as high as Oculus Rift. 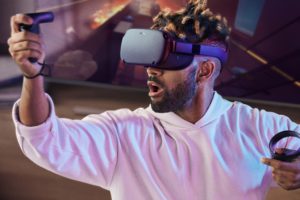 With Oculus Quest, you can move forward, backward, left, right, up, and down. All your movements in real-world reflect in the world of virtual reality. It’s the same experience as Oculus Rift, but Oculus Quest uses a new tracking system called Oculus Insight. Four wide-angle sensors are built into the corners of a front plate of the headset. Insight tracking system eliminates the need for any external sensors to track your movement.

Just like Oculus Go, Oculus Quest has built-in speakers into side straps. They provide 3D spatial audio without the need for headphones.

Unlike Windows Mixed Reality or PlayStation VR headsets, Oculus Quest utilizes similar head straps to Oculus Rift. Both sides and top of the head strap have an adjustment. And a flexible spring system allows you to slip the headset on your head like a baseball cap. 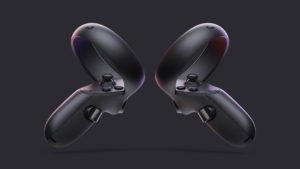 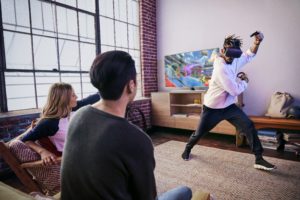 No external sensors give you not only a benefit of ease of setup but also use anywhere. It doesn’t matter space is big or small. Oculus Quest fits and works with all your environment.

Quest will have an internal cooling fan, rather than a heat-dissipating front plate of Oculus Go.

There is a power button, a charging port (USB-C, it may be possible fast-charging), and 3.5mm headphone jack if you want to use your headphones. On the bottom of the headset, there’s an IPD (Inter-Pupillary Distance) adjustment slider and volume buttons.

50 game titles are expected to be released at the launch of Oculus Quest, including a popular climbing simulator, The Climb, and adventure-puzzle game, Moss.

Oculus Quest will be available sometime in Spring 2019. There is no official date yet.

Click here to see the updates, questions and answers, setup email you when available.