Over two years since the first consumer version of Gear VR launched, Samsung has finally released a motion controller for their headsets called Gear VR Controller. 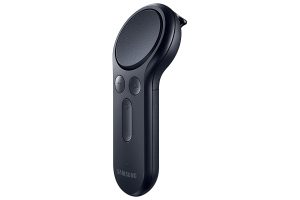 The Gear VR controller consists of a clickable trackpad, home button, back button, volume buttons, and trigger. It’s almost the same length as Daydream View’s controller, and it looks like a small version of HTC Vive’s controller. The Gear VR controller has an angle, and the back of angled head has a trigger button which can be used very intuitively in many VR games.

The controller uses two AAA batteries. According to Samsung, it will last up to 80 hours of gameplay.

The controller is compatible with all version (2015, 2016, and 2017) of Gear VRs. It connects via Bluetooth with your Samsung Galaxy smartphone, so a model of the headset has nothing to do with the compatibility. A new Gear VR headset (2017 ver, SM-R324, $130) includes the controller, but you can buy only the controller for $40 if you already have the headset. If you have previous version headsets, especially 2016 ver, you don’t have to buy the whole set (2017 version) because 2016 and 2017 version headsets are identical.

First, install two AAA batteries included in the box. Then, open Oculus app and tap “Controller” in the settings and “Pair.” You may need to update the app before pairing. Then continue to the calibration steps. The entire process for the setup takes only a few minutes. Please note that unlike HTC Vive or Oculus Rift, there is only one Gear VR controller used at the same time.

The controller makes gameplay more immersive intuitively. For example, Drop Dead, one of the best shooting games can be played far more naturally. Instead of moving your head to aim and tapping a trackpad on the side of the headset to shoot, all you need is to move your hand to aim and pull the trigger, just like a gun. Not only games, but the controller’s motion tracking feature is also useful for searching and selecting apps and games in Oculus home screen, typing on a virtual keyboard.

Gear VR Controller is about the same size as Google’s Daydream View’s controller. But Gear VR controller has a trigger button on the back of the angled head which is more intuitive and immersive in VR games. Unlike HTC Vive or Oculus Rift’s controllers, only one controller can be used at the same time, and it’s not tracked in 3D space. The controller is more like a wireless pointer, but there are more advantages than it may sound. I believe that it’s the controller all Gear VR owners should have.