The overall shape of the headset is the same as other Windows Mixed Reality headsets or PlayStation VR. It uses a headband instead of straps. A head mounted display is attached on the front of the headband. You tighten the headband by turning a knob on the back. And the head mounted display stays in place without making pressure against your face.

Unlike other Windows Mixed Reality headsets, the head mounted display doesn’t flip all the way up. Instead, Samsung installed a spring-load relief which allows you to lift the visor enough to see your surroundings.

There are pieces of cushioning on a face pad and the front and back of the headband. These are covered by leather so you can easily clean them up by wiping.

On both sides of the headband, there are headphones. You can swing to the front and back or slide up and down to place them perfectly on your ears. They offer AKG 3D spatial audio.

It comes in only one color, Black. A front panel of the head mounted display is shiny black plastic, and the rest of them are matte black. You can see the two cameras on the front panel which allows it to perform inside-out tracking.

It weighs a lot more than other Windows Mixed Reality headsets due to the presence of built-in headphones. However, I don’t feel much of difference because, for this type of VR headset (which uses a headband), most of the weight sits on the headband, not on your nose or cheeks. What’s more important for this type of headset is how comfortable it is. The Odyssey’s cushioning and leather surfaces are more comfortable than any other headsets.

Ease of setup is one of the most significant advantages of all Windows Mixed Reality headsets. Thanks to the inside-out tracking system, they don’t need external sensors or base stations along with cables from those devices and outlets for power. All you have to do is to plug HDMI and USB cables into the computer.

Once you plug the cables, the computer automatically detects the headsets and start downloading and installing the drivers. Soon, you will see a popup of the setup wizard. Click next and just follow the instructions.

At a glance, controllers of Windows Mixed Reality headsets from various brands are relatively similar, but Samsung HMD Odyssey’s controllers are better than any other controllers. The shape of the handle is round, rather than square. It’s more comfortable to hold. The button layout is the same as controllers of other headsets. It has a trackpad, thumbstick, Windows button, menu button, trigger button, and grip button. It’s powered by two AA batteries on each side. 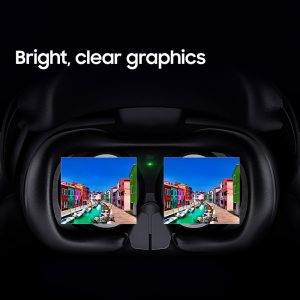 Two built-in cameras in front of the head mounted display provide six-degrees of freedom. They track your location in 3D space of the real world so you can move around in a virtual world. This system is the feature in common among all Windows Mixed Reality headsets.

Since the inside-out tracking system doesn’t require external sensors like HTC Vive and Oculus Rift, a set up is a lot easier than those premium headsets. Thus, you can take it to another room or place and start using it without hassles.

However, the price of Odyssey is much higher than other Windows Mixed Reality headsets. What’s more, the premium VR headsets like HTC Vive and Oculus Rift have been around on the market for a couple of years, and you can get them at discounted prices. Now, their prices are almost the same as the original price of Samsung HMD Odyssey.

If you prefer to ease of set up and the best quality on display, you may choose Samsung HMD Odyssey. But, to be honest, the original price is a little too expensive. For now, it’s better to wait a while for the price to go down. Click here to see the latest price of Samsung HMD Odyssey headset.