How to use a gamepad with Oculus Go

You can use an aftermarket gamepad with Oculus Go. A gamepad has to have Bluetooth to connect Oculus Go. Don’t look for a Bluetooth setting in the VR, or you will never find it. The setup should be done with the Oculus app on your smartphone, which you use for the setup of the headset. Open the app > Settings > Oculus Go [Serial Number] > Controller > + Pair New Controller > Pair Gamepad, and the app is now searching new devices. You need to put your gamepad in pairing mode in the meantime. When the app discovers your gamepad, it shows the name of the gamepad on the screen. Tap that and done.

How to turn off Oculus Go properly 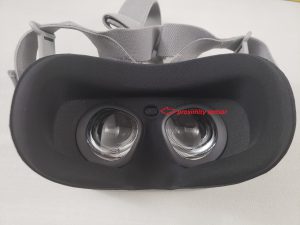 Needless to say, turning off the device during no use saves the battery. But, when I just got the Oculus Go, I was making a mistake on how to turn off the device. Actually, it had been on or in sleep mode all the time for a couple of days. Just pressing a power button doesn’t turn off the device but puts it into sleep mode. To wake up the headset, just put it on your head, and Oculus Go automatically lights up, thanks to a proximity sensor.

There is one more thing about power on/off, which annoys me a little. I don’t know whether it is a manufacturer’s intention or a bug, but when you hook a USB cable to charge the headset, the Go turns on automatically. Although I try to turn it off while it’s charging, it comes back on right away. It may not be a problem while it’s charging, but it’s annoying that I have to turn off again after it’s fully charged and disconnected from the cable. Otherwise, it may automatically turn on when the proximity sensor detects something. It’s most likely the over-the-head strap falling onto the sensor. I wish firmware update will fix this problem.

How to watch movies with Oculus Go 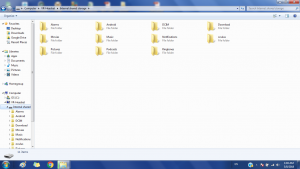 A USB Micro-B port on the side of the headset is not only for charging, but you can also transfer files from the computer via a USB cable. After connecting the cable, you have to look into the headset. A popup shows up and asks you if you allow access to data. Click Allow with the remote, and now it’s ready to transfer. The image is how the internal storage looks when it’s connected to a Windows computer. If you have video files, transfer them into Movies folder by a drag-and-drop, and you can find those files when you open video apps such as Oculus Video (pre-installed), Moon VR Player (free). Watching 3D movies is one of the most exciting experiences you can have with a VR headset. VR headsets efficiently work 3D video files and video apps allow you watch them on a big screen in virtual theater. Some apps like Moon VR Player can change the size of the screen so you can find the best size for you to feel a maximum 3D effect.

How to clean up the storage

If you don’t want to wear a head strap… 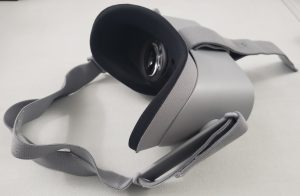 The head strap of Oculus Go is stretchy and comfortable. But do you want to ditch the head strap sometimes and hold the headset by your hands? For example, when you are reclining on a couch or lying on a bed, and watching a movie, you may want to hold the headset by your hands instead of strapping on your head. In this way, you feel less pressure on your face. The head strap is mounted on the brackets, and the brackets can turn all the way around, 360-degrees. So, you don’t have to loosen or remove the strap. All you have to do is to turn to the position until the strap doesn’t bother your face. I first turned them upward. But soon I realized that was a mistake because the brackets are actually integrated speakers. They are too far in this position. So, I turn them downward. And now, over-the-head strap blocks the way, but you can detach on the back side easily. The front goes through a loop, but the back is the only velcro. Turning around 45-degree is enough to clear around the faceplate, and the sound from the speakers is clear and loud enough for me in this position.