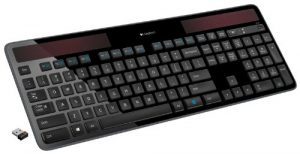 The word “Solar” may mislead you because the keyboard doesn’t necessarily expose to direct sunlight to be charged. Just like solar calculators, well-lit room, desktop lamp, or any kind of light are sufficient for Logitech K750.

For Windows users, the keyboard is the black one, and for Mac users, the white one. Both have the same specs. It’s only 1/3″ thick with the comfortable and streamlined keyboard.

How to check the charging status 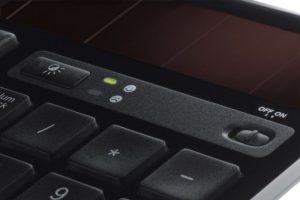 You can check the charging status by pressing the button just above the Num-Lock key. When you press the button, indicator light next to it illuminates either a green or a red LED light. The green light with a smiley face means the keyboard has a good light source, and the red light with a frown face means the keyboard has an insufficient light source. If you get the red light, you should brighten the surroundings by turning on a desk lamp, moving to the well-lit room, etc.

You can download the software called Logitech Solar App from the website. The software tells you the current remaining power. And the Lux Meter shows you how much power your light source is providing at any time.

Lost a Unifying receiver, what should I do?

You can buy a replacement of Unifying receiver alone at Amazon. Then, you add K750 to the new receiver with Logitech Unifying software.

SetPoint – Other software you may need to use with K750

SetPoint is software that lets you customize F-keys and hot-keys of the K750 keyboard. And it shows whether Caps Lock and Num Lock are on. (K750 keyboard doesn’t have LED indicators on those keys.) You can also customize other device-specific settings.

After several years, the keyboard may have some problems like bad responses, a red indicator light, or not holding a charge. Replace a battery with a new one may fix the issues.

How to replace the coin battery 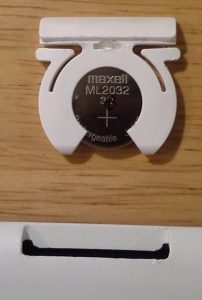 The battery tray is in a slot located on the top edge, just a little off-center. It’s accessible from the back of the keyboard. The tray is designed to be easy to push and difficult to pull. As you can see in a picture, the tray has “ears” which locks the tray in place and makes it hard to pull out.

As a trick, use something a flat and thin piece like a putty knife, push it a little into the bottom of the tray, and pry. This helps “ears” to retract inward. Keep prying and try to pull it out with a wiggle. Once “ears” get past the edge, just slide it out. This YouTube video will help you understand what I mean.

Logitech K750 is a great keyboard for those who want it to be wireless and don’t like replacing a battery often. If you have other devices like a mouse and webcam, you can add all devices (up to 6) to a single Unifying receiver as long as the devices use a Unifying receiver. Just remember that the keyboard utilizes the rechargeable battery and it fails after years of use.