Flic Smart Button ($35) is a Bluetooth-enabled rubber-coated round button. It connects to your smartphone or tablet via Bluetooth. When you press it, that activates actions you have set up in Flic app on your mobile device. The app is available at Google Play Store and Apple Appstore.

Each button can remember up to 3 different functions in the app. And there is no limit to how many actions you can add to each function. The app can tell which function to trigger from how you press the button (single click, double click, hold.) Flic is an IP44 rating. It’s fine with a splash water but not with a submersion.

You can stick Flic to any surface by using a double-sided adhesive sheet. The sheet is reusable. Washing and drying recover its stickiness so you can put it many times to change places and find the best position. For outdoor use, a battery cover of Flic can be exchanged to one with a clip so you can attach it to your pocket, belt, bag, etc. All these things are included, and battery as well.

Difference between Android and iOS apps with Flic

The information and settings are saved in your account so you can switch mobile devices and keep using the same Flic button on a new device without re-creating actions and stuff. Please note that the apps on Android and iOS are different. Even if you use the same email address and password, the settings you have made on Android devices won’t show up in iOS devices, or vice versa 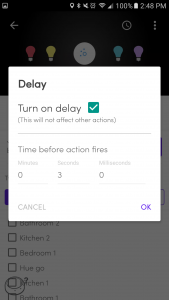 For Android users, you can set up a delay on each action. With this setting, you can make Philips Hue light bulbs in a hallway turn on one by one, starting from an entrance to an end. Conversely, when you turn off, lights turn off from the end to the entrance. This is just an example. Possibilities are endless. Unfortunately, this feature is not available on iOS devices at the time of writing.

Flic is compatible with IFTTT. You can use Flic only as a trigger of IFTTT’s Applets. You need to choose your Flic button by name and Click Type in Click, Double Click, Hold, or Any. Then you set up actions and complete an Applet. However, only creating Applet doesn’t work alone. To get Applet to work, you need to add IFTTT action in Flic app. For example, you make an Applet, “When you press and hold, activate a siren of SmartThings alerting device.” Then, you will need to add IFTTT action to Hold section in Flic app.

For Android users, a Tag feature for IFTTT is available. It’s useful if you have many Filc buttons. Let’s say you have four Flic buttons. Instead of making four Applets that has the same actions, you just need to make only one Applet like “When you use Flic with a Tag, activate a siren of SmartThings device.” After that, all you need to do is to add an IFTTT-Tag action in Flic app. You can add it to any buttons and any click types. At the time of writing this post, this feature is not available on iOS devices. 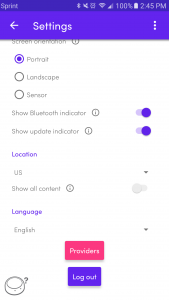 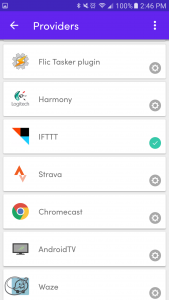 Find IFTTT and Tap it 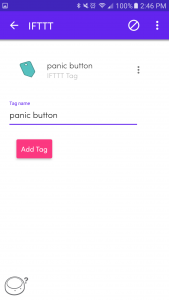 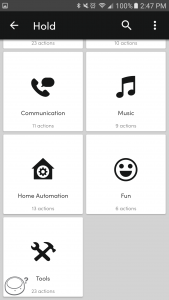 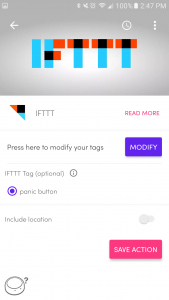 You can share Flic to others. Though Flic can connect only one device at a time, it can remember multiple mobile devices. When one device is not in range, Flic connects to the other device that was previously paired. And it works with the app on the second device and triggers different actions from ones in the first app.

For example, you share a desk with your co-worker in an office. You put one Flic on the back of the desk. You guys share the desk but never work on the same shift. During your shift, Flic is connected to your smartphone, and it triggers actions you set up in the app on your smartphone. After you finish to work and go home, your co-worker comes to the office. The same Flic button automatically connects to the co-worker’s smartphone and works with the app on his or her smartphone during his or her shift. It doesn’t matter that accounts, actions, apps, devices are different. Flic is just a button. It only sends a signal to a connected device. The app on the connected device will do the rest.

Advantage and disadvantage over an NFC-tag

NFC-tags costs a fraction of Flic. It may be as little as $1 each. As Flic, you can set up multiple actions on a single tag. But most of actions are limited to functions of mobile devices such as turning on/off Wi-Fi, changing brightness setting. Though it can launch any app installed on the device, it may not be able to do any further. For example, you can setup an NFC tag to open WeMo app on your smartphone. But, that’s all. The tag can’t switch on/off WeMo devices.

However, the biggest advantage of Flic over an NFC-tag is quickness and easiness. To scan an NFC-tag, you must unlock your device and place it over a tag. All you need to get Flic to work is a simple press of a button without a need of unlocking your device. It is more casual and fitted to your everyday life.

See Also: Create your own NFC tags with smartphone apps

Flic smart button is a very useful gadget. It’s well-designed. A reusable adhesive sheet allows you to try placing it in many different locations. You can even wear Flic by using a battery cover with a clip. Three functions, Click, Double-Click, and Hold, triggers an action or a set of actions in various apps. There is no limit of actions you can add to each function. With IFTTT, you can use Flic in even more creative ways.