In late 2017, Facebook announced a new virtual reality headset that was positioned in the middle between Oculus Rift and Gear VR regarding price and feature. It’s called Oculus Go. It’s an entirely stand-alone device meaning that doesn’t require a PC to be hooked up or a smartphone to be slipped into the headset.

At the time of writing, it hasn’t been released. And according to the website, the date of release is “early 2018.”

While the date of release hasn’t cleared yet, the price is shown on the website. It’s USD 199. Facebook and developers emphasize that Oculus Go will be the more affordable VR device than ever. And it’s definitely true. As compared with headset alone, Oculus Go is less expensive than Oculus Rift but more expensive than Gear VR. However, these two headsets require either a high-end PC or a Samsung Galaxy smartphone. Considering costs of all these, either Oculus Rift or Gear VR is not budget-friendly unless you already have either a high-end PC or Galaxy smartphone. Oculus Go, on the other hand, is literally a stand-alone device. It contains all necessary components such as display, battery, even speakers. And, a wireless controller comes with the headset. 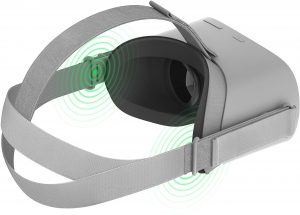 The headset is super lightweight. The new, soft, and breathable fabric is used for the facial pad. Build-in speakers are another benefit that makes Oculus Go as a stand-alone VR headset. For those who want to use their headphones, there is a 3.5 mm audio output.

The difference from Gear VR and Oculus Rift

As mentioned above, Oculus Go is a stand-alone device. You don’t need a smartphone inserted into a slot, or a PC hooked up to the device. Unlike Oculus Rift, there is no positioning camera to track your location. This characteristic makes Oculus Go very similar to Gear VR. But, when you use Gear VR, you need headphones to enjoy an immersive experience. Otherwise, the sound comes from a phone’s speaker which can’t provide real immersion. On the other hand, Oculus Go has a spatial audio built right into the headset. If you need privacy or want to use your headphones, you can plug it into 3.5 mm audio output. 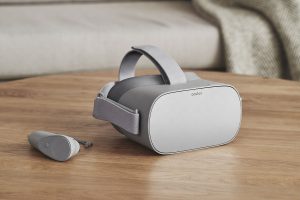 The controller is very similar to that of Gear VR. It has orientation tracking feature to use as a pointer to choose and select in a menu screen or interact in VR games. Just like Gear VR controller, it has a touchpad and a trigger button on the tip. There are two more buttons, Home and Back, but no volume buttons. The volume buttons are on the top of headset next to a power button. The overall design of Oculus Go’s controller is thicker and fatter than the Gear VR’s controller.

The VR market is believed to set to grow in coming years. An easy application and affordability of Oculus Go will be an essential role for the growth of the VR market. Check availability.