There are many apps and games available for Gear VR from Oculus Store. They are high quality and probably more than enough for you to play. However, Google Cardboard has more apps and games than Oculus, and you may want to play some of them. As you know, when you place your phone on Gear VR, Oculus Home automatically starts up. And whatever you were doing with the phone is shut. So what to do? Here is how to play Google Cardboard apps on Gear VR.

It’s very simple. Since Oculus Home starts up when a smartphone is plugged into Gear VR, so why don’t you leave it unplugged? It works, but I can’t recommend this method because a phone is never as secure on the headset as when plugged into the port. You might manage to find a way to secure your phone on the headset, but then it would be hard to place the phone in the center. 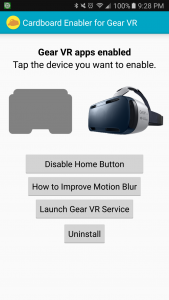 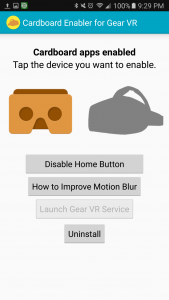 Here is an app that solves all problems. CB Enabler for Gear VR. It costs $0.99. The app can disable a function of an auto-start of Oculus Home. It’s very easy to use. Open the app and tap Cardboard icon. Then open Cardboard app and place your phone on Gear VR. Thanks to the app, Oculus Home won’t start even when the phone is plugged into the port. Plus, a touch pad and back button work! Not to mention that the phone is held on the headset securely and in the best position.

This setting remains until you switch back. So, when you play Gear VR apps, open CB Enabler for Gear VR and tap Gear VR icon beforehand.

Please note that the app may not work if your phone is rooted. Try “Gear VR Cardboard” for rooted phones.

Each Cardboard headset has different size, lenses, and a distance between. Google Cardboard needs to know things like those by scanning QR code to work best with each headset. The code on the right is for Gear VR (SM-322) with Galaxy S6.

To scan QR code, open Cardboard, and tap dots (setting) at top right corner. Then tap Switch viewer from a popup. Scanner opens automatically and points a camera to the code above.

Apps for Gear VR are growing, and probably you will never be bored with them. But it’s nice to play Cardboard apps on Gear VR because the headset has higher quality and provides much better immersive experiences than cheap cardboard headsets. The leave-it-plugged method is not recommended, rather dangerous. There is a great chance that your phone comes loose, falls and breaks. The app, CB Enabler for Gear VR, costs only $0.99 and spreads Gear VR’s platform.