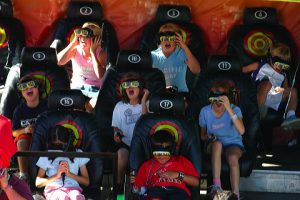 Virtual Reality is relatively new technology, and its possibilities are endless. It can be used for a variety of purposes: gaming, movies, 3D, and also educational contents. However, the most of VR headset manufacturers have set age limits. For examples, Oculus Rift and Samsungs Gear VR made a rule of 13 or older. PlayStation VR is not supposed to be used by children under 12. HTC Vive doesn’t have an exact age limit, but it does a warning against a usage by young children.

One of their concerns is eye’s health. The statistic shows that the rate of nearsightedness is increasing among young people. Smartphones and PCs are considered as a primary cause. And VR’s display is just a few inches away from your eyes. It seems much worse than smartphones or PCs. However, VR headsets provide visions that make the stimulus effectively far away. So, your eyes have to focus on distant objects in VR world. That means VR headsets may not be as much problem as smartphones or PCs. The truth is we don’t know about effects that VR headsets will make in the long term because a VR just launched recently.

Also, VR could have a bigger psychological impact on children than regular movies and games. An immersive experience sometimes has a strong effect on the developing brains of children. So, it’s crucial that parents or adults are always nearby and choose VR contents and manage a time of using the headset.

Mattel View-Master VR is a VR headset specialized for kids, for learning rather than gaming. The headset doesn’t have a head strap or even loops for that. That’s because View-Master VR is not designed for an hour of continuous use in the first place. They also created original apps. According to Mattel, their products are designed for kids 7 and up, but for 3rd party VR apps, parents have to check the guidance of each app.

As long as it’s used in the right way, VR is safe and useful for education. Parents or guardians always check if VR contents are appropriate and safe for kids, and most importantly parents should be with children while they are behind a VR headset.