If you have never had and looked for a dash cam before, you will be surprised that there are so many dash cam’s brands, models, types, features, and prices. Besides, unlike digital cameras or DVRs, most manufacturers of dash cams are small and little-known. But, when you become familiar with the features of dash cam and know what features you need, it’s a lot easier to find the best dash cam for you. Here are the key features of dash cam you may be interested.

The first thing you should determine whether you need a single channel dash cam to record only in front through a windshield or a dual channel for both front and rear. While a majority of front cameras is mounted on a windshield, rear cameras can be mounted either on the rear window or outside of your car for vehicles that don’t have a rear window. In case you need to mount a rear camera outside, you should consider the quality of waterproofness in the rear camera.

Mount on a windshield or rear view mirror 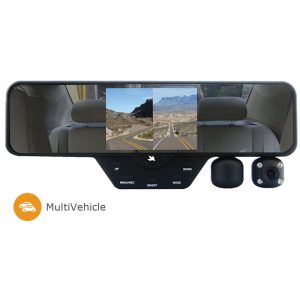 2160p (2880 x 2160 pixels, aka Ultra HD) is the highest video resolution available today. If you want a dash cam for not only a security purpose but also capturing scenic road and view on your trip, The highest resolution may be the main factor when you choose the best dash cam for you. And there is wide-screen in the market of dash cam, too. 2560×1080 is an aspect ratio of 64:27 instead of 16:9. It offers a cinematic capture with additional focus on the surroundings to the left and right.

Night vision is the feature of cameras that is capable of capturing in dark environment. The feature is not very important on dash cams because headlights or street lights are bright enough to capture the surroundings. However, if you mainly drive at night in a very dark environment or park your car where there is barely street light, Night vision may be an important factor.

With this feature, a dash cam doesn’t just stop recording when a storage of a memory card gets full. Instead, it automatically overwrites the oldest file, so you don’t have to worry about running out of storage. When something happens, such as an accident and hit&run, you pull out a memory card and copy the file to other media or mark the file as important so that it won’t be overwritten by Loop Recording. For some dash cams having G-sensor, files are automatically stored in a separate folder whenever it detects an impact. Almost all dash cams have the feature of Loop Recording.

G-sensor is a built-in sensor in cash cam that detects an event involving force, impact, shock, such as accident and hit&run. For most dash cams, the files containing these events are automatically stored in a separate folder so that they won’t be overwritten by Loop Recording feature. When you park your car, most dash cams are off. When it detects the events, G-sensor turns on dash cam and make it start recording.

When someone damages your car in your absence, a parking mode with G-sensor alone may capture a license plate of a car that hit your car. However, it’s not always successful. Since it needs some time to turn on and start recording, It may be too late to capture a scene that can be used as evidence. And, most importantly, a recording is always afterward of the events.

With a buffered parking mode, a dash cam continuously records when you park. But, it won’t be saved in a memory card unless G-sensor or Motion sensor detects the events. Not only can you see the record of afterward footage, but also the footage before the detection. (typically 5 to 10 seconds before)

Please note that almost all dash cam with the feature of parking surveillance needs a hardwiring cable that always connects vehicle’s battery power. The cable has a voltage meter to monitor a battery level. When a battery voltage drops below a certain level, the cable automatically shuts off a dash cam to stop further battery discharge.

See also: How does a parking surveillance by dash cam work?

Dash cam with GPS can keep track of your vehicles’ location and speed. Later, when you see the footage on PC, you also see a map showing where you drove and speed in a video. GPS antenna is either built in the dash cam or connected externally by a cable.

Dash cam with Navigation means just as it sounds. A display of dash cam can show a map, location, turn by turn navigation. It’s the perfect solution for those who need both of Navigation and Dash Cam and don’t want to put multiple devices on the windshield. The drawback is that you certainly mount it on a windshield and sacrifice the space and your vision more or less. Since currently, available dash cams with navigation are all-in-one units, they have to be placed on the center of the windshield. And you can’t mount them behind a rear view mirror because you need to see a map.

Wi-Fi enabled dash cams connects to your smartphone. You can see real-time and recorded footage on your smartphone without removing a memory card. So, there is no risk that you forget to put back a memory card after a backup. And dash cam no longer needs a display. It can get smaller and more discreet.

There are key features of dash cam you may be interested. And they will help you find the best dash cam for you.